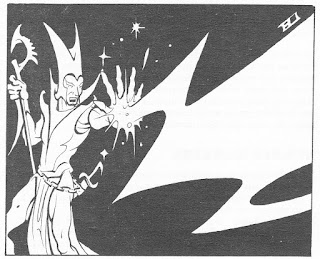 I'm sticking to the Vancian paradigm, because as I've said before that shit is a lot weirder in the source material than four decades of just being "the way magic works in D&D" can make it seem. But in the context of Xish, specifically, what is magic? And who are the people who use it?

One thing that gets lost in translation from Vance, at least in later editions, is that magic really seems to be a matter of just finding spells and reading them. At least in the first novel, which is all I've read, there's not much indication that "being a wizard" is an intense vocation that you devote your whole life to (by the second chapter, T'Sain seems to know as many spells as Turjan, despite having only been created in a vat very recently)... except in the sense that that's what it takes to actually gather together and find spells.

Because in The Dying Earth, magic seems to be as on the way out as everything else. There are only ~100 known spells, the rest having been lost to time. Anyone can learn a spell, because spells are just weird words on a page that imprint themselves on your brain until you cast it. But the people who actually know a lot of spells seem to be the ones who devote most of their life to tracking down moldering old books (or are rich and/or powerful enough to have people do it for them) - because it's not learning spells that takes efforts, it's finding the damn things to learn in the first place.

Of course, that's not quite the whole story. It's strongly implied in Vance that learning a spell is a physical process; he never really talks about "memorizing" spells, it's more like spells are something physically stored in your brain. They take up space in there. That's why you can only have so many ready to go at one time - there's just a hard physical limit. It seems clear that, aside from tracking down books, a large part of a magic-user's time would have to be training his brain to fit more and more spells in there. In D&D terms, gaining new "spell slots" really just means that you've managed to increase your brain's magical storage capacity. Which, again, in theory is something anyone could do - but it takes time.

So in Xish, that's what makes magic-users magic-users: they've devoted a significant portion of their life to finding and reading arcane texts, carefully studying them on the off-chance that there's a spell in there (as in Dying Earth, magic is rare, and the number of available spells is only a fraction of what it once was), and another significant portion to daily meditation and mental exercises so that you can actually memorize the spells you've collected. There is, otherwise, nothing to being a magic-user; there's no "gift" one has to be born with, though being particularly intelligent of course helps (i.e. having hight INT, thereby increasing experience as a prime req and/or granting bonus spell slots, depending on edition).

This especially works in older editions of the game, where the only thing actually tracked by numbers on your sheet is how many spells of each level you can memorize per day. The spells you actually have in your spell book are purely a function of in-game shit: i.e. finding spells to put in there. Nothing's stopping a 1st level wizard from writing Power Word: Kill down in his book; he just can't fit it into his noggin yet.

Of course, on this paradigm it still seems as though everyone in the party could theoretically know at least a few spells: why couldn't a high INT fighter have a gander at his friend's spell book and memorize at least one or two, if there's nothing inherently special about being a magic-user?

Well, for one, wizards don't share. Every spell a magic-user knows is a jealously-guarded secret. After all - it takes a ton of effort to track down even the simplest spells. Remember: there aren't just scrolls floating around everywhere in this world, and there certainly aren't any fucking "magic shops" you can drop in on. There are a finite number of genuine magical texts out in the world, and most of them are already in some other magic-user's carefully-trapped collection. You really have to dig for that shit. Sometimes you have to do some unsavory things (in practical terms, the best thing to do as soon as you meet another magic-user is to kill him and jack his spell book). And now this meathead wants you to let him just read a couple of them? Fat fucking chance.

An upshot of this is that in Xish there are no fucking magical colleges or wizard schools. Magic-users don't even take on apprentices, because, again, you don't actually need someone to teach you how to use magic. You just need the spells. So any old wizard taking some young aspiring caster under his wing is just begging to get his throat slit in his sleep so the kid can raid his library.

The other main thing, and here I'm borrowing more from Lovecraft than Vance, is that learning magic ain't good for you. It's not shit man was meant to fuck with - no one even really knows where these spells ultimately come from, they're just shit written down in old books by guys that have been dead for who knows how long. And those guys don't seem to have had much idea where spells come from either. So whenever you memorize a spell - which, remember, means physically storing it in your brain - it's the equivalent of picking up some fungus you see lying around sometimes and popping it in your mouth. You just hope you're not poisoning yourself, but you don't really know. And in reality, you are. All magic-users are slowly going insane, because turns out you actually shouldn't ingest stuff you have no idea what it is or where it comes from.

And magic-users all know that, on some level. The first time you memorize a spell, it feels wrong; something's in your brain that's not supposed to be there. The guys who become magic-users are the ones who ignore that feeling and push on, gradually becoming used to it. But the average person who memorized a spell for the first time would nope the fuck out of the whole enterprise. So even if a magic-user was inclined to share spells with the rest of the party, chances are they're not interested anyway.
Posted by N. Manscorpion at 00:00